Part four in a weekly(😺) devlog.

There shouldn't be any plot spoilers in these posts, but there may be occasional discussions related to characters, locations, mechanics, and other aspects of my potential upcoming Shadowrun campaign (tentatively titled "CalFree in Chains"). You may want to skip them if you want to be completely surprised.

Last week I described my process for fleshing out missions in a Shadowrun campaign. I'm still working on that, but in conjunction I'm also starting to write the actual dialogue for some of those missions. This is helpful in a few ways. The details of the mission structure are still fresh in my mind, so I don't need to review my notes and reconstruct what I was planning. I've also found that I sometimes encounter happy accidents when actually writing something that can then inform future missions: for example, while writing dialogue, I might get a better conception of who a character is, and then realize that that same character would be invested in the outcome of a future mission, and have a new plot thread ready to weave into it. This potentially helps me avoid some revisions in the future by getting it right the first time.

In my Caldecott retrospective I wrote at length about my process of writing dialogue. I won't rehash that here, but I did want to share some specific examples.

One thing that has surprised me about writing is that I never get writer's block. Any time that I'm not sure what to write, I write down what I'm going to write, and then I write the thing that I wrote. That sounds both silly and useless, but it's the grease that keeps things coming smoothly for me. Hm, maybe this would be considered an "outline"? I don't think of it that way, but it might be the same idea.

(Quick reminder: These posts will give away some minor details about characters and locations, but no big secrets. You can consider these "mini spoilers.")

So: In one mission, you need to create a diversion in order to infiltrate a heavily-secured area. There are a few different NPCs you can interact with who may provide an opening for you, based on your character's skills. Here's my up-front summary of a planned conversation with a plumber.

I'm sure that's very cryptic and messy - when I write these things, I'm only considering myself as a reader, so I'm very loose with abbreviations and references to things I already know. It would be a lot cleaner if I intended someone else to read it! But I get a ton of value out of just setting it all down. I now have a framework to work with, and whenever I get stuck, I just go back and look at the thing I said that I would write, and then write that thing.

Filling out the entire conversation results in this beautiful piece of text. 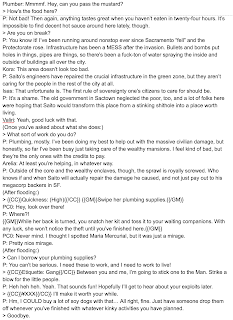 Hm, that isn't very readable, is it? Let's see if I can format that text nicely in here...


Plumber: Mmmmf. Hey, can you pass the mustard?> How’s the food here?
P: Not bad! Then again, anything tastes great when you haven’t eaten in twenty-four hours. It’s impossible to find decent hot sauce around here lately, though.
> Are you on break?
P: You know it! I’ve been running around nonstop ever since Sacramento “fell” and the Protectorate rose. Infrastructure has been a MESS after the invasion. Bullets and bombs put holes in things, pipes are things, so there’s been a fuck-ton of water spraying the inside and outside of buildings all over the city.
Kora: This area doesn’t look too bad.
P: Saito’s engineers have repaired the crucial infrastructure in the green zone, but they aren’t caring for the people in the rest of the city at all.
Isas: That unfortunate is. The first rule of sovereignty one’s citizens to care for should be.
P: It’s a shame. The old government in Sactown neglected the poor, too, and a lot of folks here were hoping that Saito would transform this place from a stinking shithole into a place worth living.
Valiri: Yeah, good luck with that.
(Once you’ve asked about what she does:)
> What sort of work do you do?
P: Plumbing, mostly. I’ve been doing my best to help out with the massive civilian damage, but honestly, so far I’ve been busy just taking care of the wealthy mansions. I feel kind of bad, but they’re the only ones with the credits to pay.
Arelia: At least you’re helping, in whatever way.
P: Outside of the core and the wealthy enclaves, though, the sprawl is royally screwed. Who knows if and when Saito will actually repair the damage he caused, and not just pay out to his megacorp backers in SF.
(After flooding:)> {{CC}}Quickness: (High){{/CC}} {{GM}}Swipe her plumbing supplies.{{/GM}}
PC0: Hey, look over there!
P: Where?!
{{GM}}While her back is turned, you snatch her kit and toss it to your waiting companions. With any luck, she won’t notice the theft until you’ve finished here.{{/GM}}
PC0: Never mind. I thought I spotted Maria Mercurial, but it was just a mirage.
P: Pretty nice mirage.
(After flooding:)
> Can I borrow your plumbing supplies?
P: You can’t be serious. I need these to work, and I need to work to live!
> {{CC}}Etiquette: Gang{{/CC}} Between you and me, I’m going to stick one to the Man. Strike a blow for the little people.
P: Heh heh heh. Yeah. That sounds fun! Hopefully I’ll get to hear about your exploits later.
> {{CC}}¥XXX{{/CC}} I’ll make it worth your while.
P: Hm, I COULD buy a lot of soy dogs with that… All right, fine. Just have someone drop them off whenever you’ve finished with whatever kinky activities you have planned.
> Goodbye.

Cool - so, that's one minor but complete conversation. Or at least the rough draft of one! But complete enough for this phase.

This is a good place to re-iterate that I do not think any of the things in this devlog are necessarily best practices, and that's even more true of dialogue than most other things. These are habits and conventions that I've developed over the years that work well for me, but I'm sure there are far more efficient and better ways to structure things.

One particular obstacle is that I'm composing dialogue in a linear format (Google Docs), but it will need to be ingested into and served from a complex structured format (the Conversation Editor). And since it's a video game, there are dialogue loops, hidden branches, reactivity, pre-requisites, all sorts of stuff. I can look at this and see where the loops and stuff are, but it would be horrible for collaboration.

Anyways. Breaking down my own system:

Plumber: The first time I reference a character, I'll use the full name that I plan to display in the conversation interface. For brevity, later in the dialogue I'll refer to them just by their first initial - in this case, P. (Trivia note: That's why I make sure all of my major characters have names with different first letters. It just simplifies and clarifies my dialogue shorthand if I can see a K and immediately know that it refers to Kora.)

> How’s the food here? I use the chevron to indicate a character dialogue prompt. This is just a simple line of dialogue that the player character can select once.

Infrastructure has been a MESS after the invasion. Ugh. Reading this now, I can see this should be "since" and not "after". For the current phase, I'm just trying to get down my raw material. There will be a proper editing phase later where I'll go back through it and clean it up. Editing never really stops, though. I'll review the text a third time when I copy-paste this stuff into the Conversation Editor, and again when playtesting the game, and every time I'm looking at dialogue to fix a bug...

Kora: This area doesn’t look too bad. Kora is a potential companion who may be present during this scene. If so, she'll pipe up and speak this line. If not, she won't. This is a rather simple interjection that's just for flavor. More important dialogues might have characters who start entire branches of speech, potentially bypassing challenges (or creating new ones!)

(Once you’ve asked about what she does:) I use parentheses as notes to myself for metadata that will need to be inserted into the conversation editor later. In this particular case, it indicates that the following prompt should be hidden until you've learned the information from the previous branches. The same notation can be used to indicate that a sound should play, or a character should animate, or the player should gain karma, whatever.
> {{CC}}Quickness: (High){{/CC}} {{GM}}Swipe her plumbing supplies.{{/GM}} This is a skill-based pre-requisite. All players can see this option, but it will be disabled unless you have the required skill. {{CC}} and {{GM}} are editor markup tags that control formatting for conditions and GM text respectively. {{CC}} is used to indicate what is required to choose an option, which could be a skill or an item or being a certain metatype. {{GM}} is used to indicate action, as opposed to speech. The (High) thing is a placeholder - it's based on something that HBS used in Dragonfall and Hong Kong but that I haven't used in my previous mods. The idea is that, instead of skill check levels being hard-coded, they will change over time to become more challenging as your character grows stronger. So, if you ran this mission first, you might only need a Quickness of 4, but if you ran it later, you might need Quickness 6. This isn't the exact format that will be input to the conversation editor, but I'll have that figured out before I start ingesting dialogues, and can replace these on the fly.

PC0. This is pretty rare, but occasionally your character will appear as a speaker in the dialogue. I always use PC0 to refer to the main character, since in the game engine they're always known as "Player Character 0".


So, uh, that's it! There is a LOT of dialogue to write. So very, very, very much. Maybe I'll write more about why I'm writing so much when I write my next writing next week.
Posted by Christopher Charles Horatio Xavier King III, Esq. at 9:36 PM