What I Write When I Write About Writing

Part five in a weekly(🙉) devlog.

First up, on the off chance that anyone who's reading this blog is looking for more Shadowrun workshop content, check out the Dead Man's Switch update for SRHK.  I haven't had a chance yet to play it, but it sounds awesome: not just porting the underlying campaign to make it runnable in SRHK, but also expanding and enhancing it with cool features like persistent upgradeable runners, as well as adding a lot more text and ties to other pieces of Shadowrun fiction.

Speaking of text: I have finished my mission dialogue! (Insert happy dance.)

There's still a long way to go, but at this point I feel like the narrative backbone of the campaign has been formed. If I wanted to, I could now start work on the actual scenes: wiring up triggers and creating NPCs and all that stuff. I still want to get more writing done and some revisions before I take that step, but right now it's more of a matter of filling in the gaps than figuring out where I want to go.

This week's post will just be a few random notes vaguely related to my writing workflow.

I compose all of my text in Google Docs. I collect different types of writing in each separate doc; here's what the current list looks like. 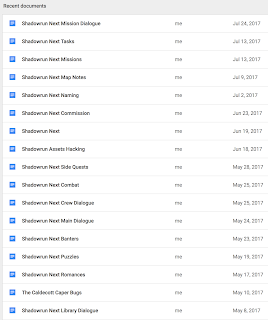 You'll see that everything is labeled "Shadowrun Next". That was my placeholder title. I might do a post in the future listing all the different iterations I've gone through (which might still continue - I'm increasingly fond of "CalFree in Chains" but it definitely isn't set in stone).

Some of these are pure design documents, like "Combat" and "Side Quests". A few are for brainstorming, like "Naming" and "Puzzles". The "Tasks" one is a process document, with my checklist of items to complete before release. But most of these are for dialogue: Mission Dialogue, Main Dialogue, Banters, etc.

In general, I start one document, work on it exclusively for weeks until it's finished, then move on to the next one. Once they're all done I'll start my editing phase. There's sometimes some interleaving - as noted in last week's post, I'm fleshing out my missions ("Shadowrun Next Missions") in conjunction with writing the mission-specific dialogue ("Shadowrun Next Mission Dialogue"). But in general I like the focus of writing in one mode for a while. Banters are very short with lots of back-and-forth, crew dialogue tends to be longer and more thoughtful, etc.

I do some of my writing on the subway, but most of it while lying on the couch at home. This is the "couch phase" of development, in contrast to the "chair phase" when I move to my desktop with its big monitor for work on maps and triggers.

While writing on the couch, I'm usually... probably about 70% focused on the text. It's definitely less efficient than on the subway; I don't have specific metrics, but it feels like I write about as much during a 25-minute ride as during an hour at home. I'm not super-disciplined about writing, so I'll periodically hop into social media or read email or something. I know many writers who use programs like Freedom to block themselves off from wasting time online when they're supposed to be writing. I've been a little tempted by that, but I feel like I still get a decent amount done, and I do really enjoy being able to quickly Google things that come up while writing: checking the science behind a thing to see if what I'm writing is feasible, or looking up a brief history of a city to see if there's any interesting flavor I can reference, or checking Shadowrun canon to make sure I'm not obviously contradicting stuff.

Just for fun, here are the items in my recent search history.

When you play the game, you'll probably be able to guess which two missions I was working on during this span of time.

So, yeah... I'm coming up on the completion of my rough draft of game text. The main thing I have left to do is dialogue for the side-quests (examples in Caldecott were setting up the concert for Horatio and making a video game for "Doctor" Tolar), combat barks, loading screens and the epilogues. I also have a round of pick-ups that I want to insert prior to starting editing; I may blog about that process later.

Scanning through my extant dialogue: so far I'm at about 470 pages of Google Docs text. The word count on the docs is (punches numbers into calculator) 192,939 words. That's inflated from the actual, since these docs also include markup for the triggers as well as outlines and notes for myself; but I'll also be writing more for the remaining text, so it's probably going to be in that ballpark at the end. That's, uh, a lot! The Caldeott Caper came in at 98,000 words, and Antumbra Saga was only 51,000.

More isn't necessarily better, and especially after the reaction to Hong Kong, I'm a little nervous that this campaign will be too much on the talky side. Part of that is an inevitable consequence of trying to support pacifist missions: I feel like I need a lot of dialogue (including investigations, solving puzzles, skill checks, etc.) to replace the gameplay that's "lost" if you bypass traditional combat. I was stunned to see that one single mission clocked in at nearly 30 pages! For contrast, a typical conversation with one of your crew members back at base runs around 3 pages. So, that one single mission has almost twice as much text as all the conversations you'll have with a single crew member. That feels like too much... unfortunately, I don't think I'll really be able to gauge if it works until I'm able to play through it. If it doesn't, that'll be a shame since I sunk a lot of time into it... but better to cut late than to release something I'm unhappy with. (And hopefully it's good!)

So, yup, that's it for now. Next week I'll be rolling onto the side quest dialogue and getting one step closer to that completed rough draft!
Posted by Christopher Charles Horatio Xavier King III, Esq. at 8:00 PM