I kind of vacillate between this blog being a record of all the stuff I've read / played / whatever, and just being a pressure valve for when I have something in particular I need to get off my chest or I want to work through some ideas. In the earlier days of this blog I would occasionally put together round-up posts that minimally checked the boxes for media I'd recently consumed. This is something like that! Mini spoilers on each topic below.

I've continued working my way through two fun real-world-but-also-science-fiction-y series. The first is the Company by Kage Baker. I previously wrote about In the Garden of Iden and Sky Coyote, and just finished Mendoza in Hollywood. Mendoza is a wonderful protagonist, and it's really cool to see her continue to mature and adapt to her role. She's nowhere near as cynical as Joseph, but is slowly moving in that direction. This novel was especially interesting because it felt much more focused on Company employees, unlike the first two which (as I recall) paid more attention to the natives. We're getting a better sense of the very broad range of personalities among the Immortals and their various goals and quirks. I'm also really digging the development of the overarching mythology. This series had very specific rules laid down from the very start, and we're now getting more and more indications that those rules aren't as absolute as they once seemed. It's a long series and I'm not in a particular rush to get through it, but I'm getting more intrigued the further I get.

Also, as promised, I'm continuing to make headway in Charles Stross's Merchant Princes series. The writing gets better and better with each book, especially the dialogue, which has been getting more natural while still being fun and snappy. My favorite aspect, though, is the gonzo approach to plot. The stakes keep on getting raised to higher and more ludicrous levels, with (mega spoiler) interdimensional weapons of mass destruction and the recent revelation of Dick Cheney as the latest grand villain. The characters are a lot of fun too: the supporting actors can seem a little thinly sketched at first, but across multiple novels they've had plenty of opportunity to grow more complex and endearing. But Stross also doesn't have any hesitation about killing off beloved characters for dramatic effect. The most frustrating thing about these books is their cliffhanger endings, which are really egregious even for thrillers. I'm slightly tempted to wait until the series is officially over before going any further, but may not be able to hold out, we'll see!

A few months ago I played and loved Butterfly Soup. I didn't give it its own post... it's pretty clear that the game wasn't created for me, and I don't think I have much of value to say about it, but I thought it was incredibly charming and thought-provoking and kind of inspiring. Min in particular is an incredible character, and I couldn't help laughing at almost everything she says: she's a tornado packed into a tiny human body, throwing all of her passion and fury at anything that gets in her way. It's especially great to see how the game interface can uniquely enhance her presentation: little touches like the way the screen shakes whenever she speaks do a lot to enhance her surreal qualities, and is a wonderful use of this medium. 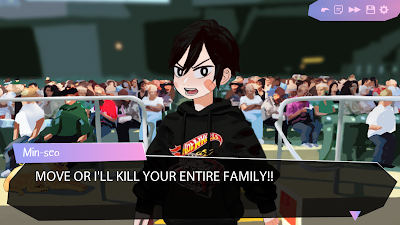 It'll probably be a little while before my next media post. Continuing my recent nonfiction reading on economic topics, I just picked up the famous Piketty book on Capital in the Twenty-First Century. I'm pleasantly surprised at how readable and engaging it is: I was expecting a more dense financial tome, but it's clearly written for a general audience, structured very clearly, with patient and welcoming language. It's also been a fun surprise to see so much attention paid to plots and characters from novels by Jane Austen, Honore de Balzac and other 19th century novelists. Still, it is a long book and much less of a bedtime read than Stross or Baker, so it'll take some time for me to finish.
Posted by Christopher Charles Horatio Xavier King III, Esq. at 9:45 PM