Wow, Oxenfree is a great little game. It's close to my Platonic ideal of a video game: short enough to complete in a few sessions, interesting mechanics that feel like they're designed to enhance your experience rather than blunt your progress, vivid characters, interesting choices, an intriguing but not overly dense mythology, sweet soundtrack, and distinctive visual style. Oh, and not too expensive, either! 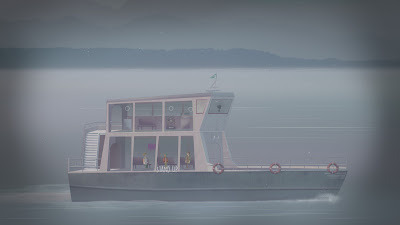 There are a lot of things to praise about this game, but the element I'm thinking of most now is its conversation system. It's the most naturalistic, free-flowing experience I've had in a game, and feels a little like being in a Wes Anderson or Robert Altman movie: characters interrupt one another, leave thoughts hanging, correct themselves mid-sentence. It's close to how people actually talk: sentences aren't polished, meaning accrues in the dialogue, and conversation is at least as much about strengthening relationships as it is about exchanging information.

Mechanically, the system works a little bit like dialogue in Ladykiller In A Bind. Dialogue just happens around you, and at some point it might become appropriate to respond. Options pop up, and you can click on one to proceed. You might interject and cut off the other person, or wait for them to wrap up their thought before adding your own, or just let the moment pass and have them continue or fade into silence. Unlike Ladykiller, this all happens in real-time as you hear the spoken words: generally you have time to think over and consider, but in some of the more intense situations you might blurt something out because you don't have time. 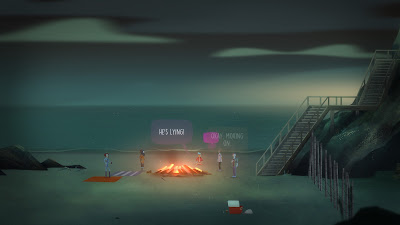 My favorite thing, though, is that this all happens simultaneously with all the rest of the gameplay. As in real life, conversations happen while you're walking with someone, or when folks are milling around waiting for something to happen. The most memorable scene for me occurs near the beginning, when you and some other people are hanging out around a bonfire on the beach. There's a great, long, ongoing discussion that twists and veers into some deeply personal territory; while it's going on, though, you might be exploring the beach, or grabbing a beer from the cooler, or tossing stones into the ocean, switching between activities at will. There's... an air of distraction, I guess, that's deeply appealing to me.

Oxenfree does kind of have the "look" of an indie game. It isn't pixel art, but the characters are small and not very detailed, with each person having a major distinguishing feature. The backgrounds have a painterly style, accompanied with some gorgeous modern lighting effects. The overall effect is beautiful and homey and slightly eerie. The animations are particularly good: even simple actions like walking downhill carry a nice weight to them. 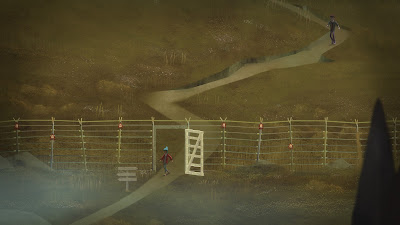 And, the music! The game as a whole but the soundtrack in particular reminds me of a Boards of Canada album, which is a huge compliment. There's sort of a low-key synthwave feel to much of the ambient music, which is then complicated by and supplemented with the fantastic lo-fi warblings coming in over your transistor radio.

Possibly because I recently finished playing The Longest Journey, I've been thinking about what defines something as an "adventure game". Oxenfree doesn't have what used to be the defining characteristic of that genre, an inventory: there are no objects to collect or combine or use on the environment. Instead, other than walking around and choosing dialogue, the main mechanic is an innovative one: a tuneable radio. At any point at all in the game - while in motion, while talking, whatever - you can whip out the radio and start twisting the dial. This has gameplay mechanics in a few places: you might hear some relevant information, or trigger a feedback loop in your environment. But it also casts an enormous environmental shadow over the entire game. You might pick up fragments of an old noir radio play, or a numbers station, or a big band, or an old Fireside Chat. This all contributes to the sense of being slightly out of time, of multiple generations collapsing on this one island, as well as a slightly uncanny sense of being both connected to and separated from the rest of the world. You can hear, but not speak; you may receive warnings but be unable to interpret them; or you may recognize that someone else is in danger but be unable to alert them. 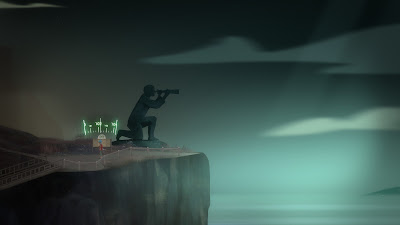 All this takes a while to get going. The game isn't long, but it also doesn't rush things, and spends ample time easing you into its world before the strangeness starts to creep in. Along with the dialogue, the heroine Alex was my favorite part of the game. She's a predefined protagonist, and the game drops you into the story in media res, responsible for voicing her and making decisions before you know her whole story. You pick up on context clues, learning as much from the dialogue choices available to you as what other characters say to you, getting the knack of her personality while simultaneously getting a chance to steer it. 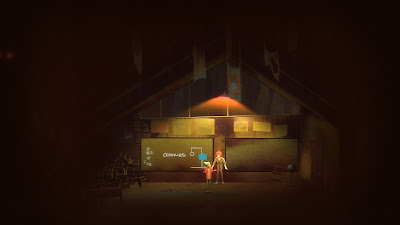 Often, after delivering a line of dialogue, thought bubbles will appear over other characters' heads, showing your own face or that of another character. I still haven't figured out exactly what this means: specifically, if it always means that their opinion of you has improved, or if it can also indicate disapproval, or if it just means that they're thinking of you (or whoever is pictured).

I was really excited early on when I thought that the game might include romances: there's an early game of FMK that sets your mind thinking along those lines, and several lines and choices along the way that seem like they might support it. Sadly, it looks like that isn't the case, at least not for Alex. Which is totally fine - it isn't what this game is about, so it doesn't need to have it - but I couldn't help feeling a little regretful for what might have been.

I did get to experience being kind of catty and petty, though. During the time I thought romance was possible, I set my sights on Nona, which put me in an awkward position with Ren. I did everything I could think of to keep them apart: I asked Nona for her opinion of Ren, took her disinterest at face value, urged Ren to back off, kept Nona and Ren from hanging out at the comm tower, didn't talk up Ren, didn't tell him that her birthday was coming up. And they still got together! Per the ending, apparently it's possible to keep them apart, but damned if I know how. It shouldn't bother me - I actually do, in the abstract, like the idea of a romance that doesn't revolve around the player character - but it felt sort of weird to have so many lines of influence that seemed to be guiding an outcome, just to have them all fail. 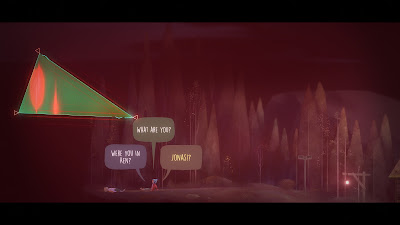 ANYWAYS. None of this is what the game is about! I loved the gradual reveal of the island, finding the truth about what happened to the submarine, the deterioration of the "ghosts", all that good stuff. It strikes that line between science and mysticism in a really wonderful way. I tend to hate attempts to conflate the two, which usually involves hand-waving or fake-outs, but this story was just deep and complex enough to pull it off, striking a note plausible enough for me to buy in. 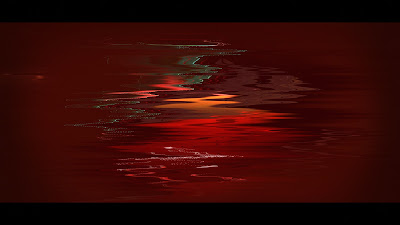 The circular Finnegans Wake-esque structure of the game also seems clever and potentially fun. Thus far I've only finished an initial playthrough. I'll probably give it another whirl at some point, but am decently happy with the ending I got, so I'll likely wait a while for my memory to fade somewhat.

I know, I know. There are a lot of indie games out now on Steam, and no way everyone can play everything that's critically acclaimed or whatever. Oxenfree stands out as particularly good, though, and minute-for-minute is one of the best games I've played this year.

I have an album for the game, but I've totally given up on getting it up here after spending nearly an hour fighting with Google. One of these days I'll set up Flickr or something and finally post the six or so albums that have been languishing inside Picasa. I'm sure everyone is riveted by the prospect of finally seeing them.
Posted by Christopher Charles Horatio Xavier King III, Esq. at 6:58 PM