This is a short post promoting a short but great game. Teenage Mutant Ninja Turtles: Shredder's Revenge is a blast, perfectly evoking the classic beat-em-up games from the 90s. It lovingly rips off the feel and setting of those entries, particularly Turtles In Time, which was my favorite arcade game as a youth.

The core of the game consists of playing through levels, knocking out enemies and fighting a boss at the end. There are some minor new bells and whistles though, like an overworld map for moving between stages, hidden collectibles and characters, and challenges and achievements. A more significant update is character progression: you gain XP as you defeat enemies and complete bonuses, which increases your level. Each level gives some persistent upgrade to your character: maybe an extra health bar or a new dive attack or an additional use of your super attack. Those levels persist across game runs, but are unique per character, so you might want to stick with one to use their extra power, or switch to another to level them up as well. The classic TMNT games offered the four turtles as playable, while this entry allows up to six people to play at the same time, with April and Splinter joining in the fun. I played the first few stages solo as Leonardo, then had some incredibly fun online co-op sessions with my brother where I played as Donatello. The co-op is a blast all around. It feels incredibly fast and responsive, not at all laggy even when playing far apart. The game design really rewards having multiple players: there are some challenges, like enemies carrying shields, that are extremely hard for a single player to pass but that are a breeze with a well-coordinated team. 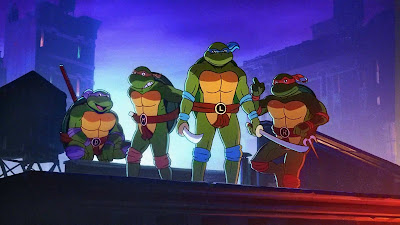 We used Discord for voice chat, which worked great. I don't do much co-op play, so my only recent experience has been some casual group play in Minecraft, and my last experience before that was probably Mass Effect 3 multiplayer a decade ago. Anyways, we were both pleasantly surprised by how good the voice chat was. I had forgotten that I had previously configured my setup to be push-to-talk, but after disabling that, the output worked well, and we could hear each other great. This was good for casual chats, and also for coordinating action within the game. ("Let's beat up the pig first." "I'll take the right, you take the left.") 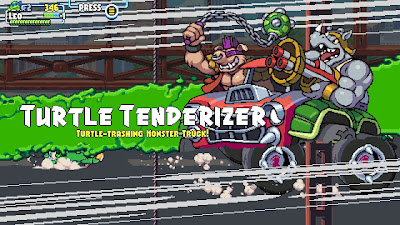 As others have reported, the game is short, but personally I view that as a feature and not a bug: I love being able to finish a thing and still live my life (and/or play other games!). We played for a couple of hours across two weekends to get from the very start to the very end. Since then we've replayed a couple of matches with Splinter and Michelangelo to level them up some and pick up some missing collectibles and challenges. It seems that only the host gets credit for completing a challenge during a given stage. 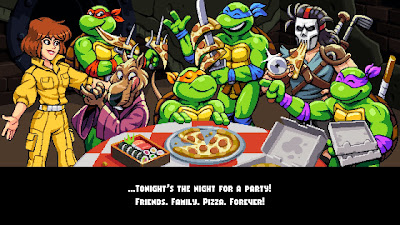 This has been a fantastic experience, and while I'm satisfied by the game, I'm definitely hungry for more! I could easily see some DLC being welcome, adding some more stages to this game and perhaps raising the level cap; the overworld design already lends itself well to this kind of extensibility. I'd also enjoy seeing a similarly loving treatment of the classic X-Men brawler, which was my other favorite arcade game of that era. And heck, maybe one of these days I'll finally get around to playing Scott Pilgrim vs. The World!