Okay, so it took me a bit longer than I had thought to beat Dragonfall. That's a good thing, though! The expansion is a big longer than the original campaign, and while it continues to thankfully eschew any hint of grinding, it also creates some engaging spaces where I was tempted to spend time and relax between missions, getting to know the world of Berlin in 2054 better. 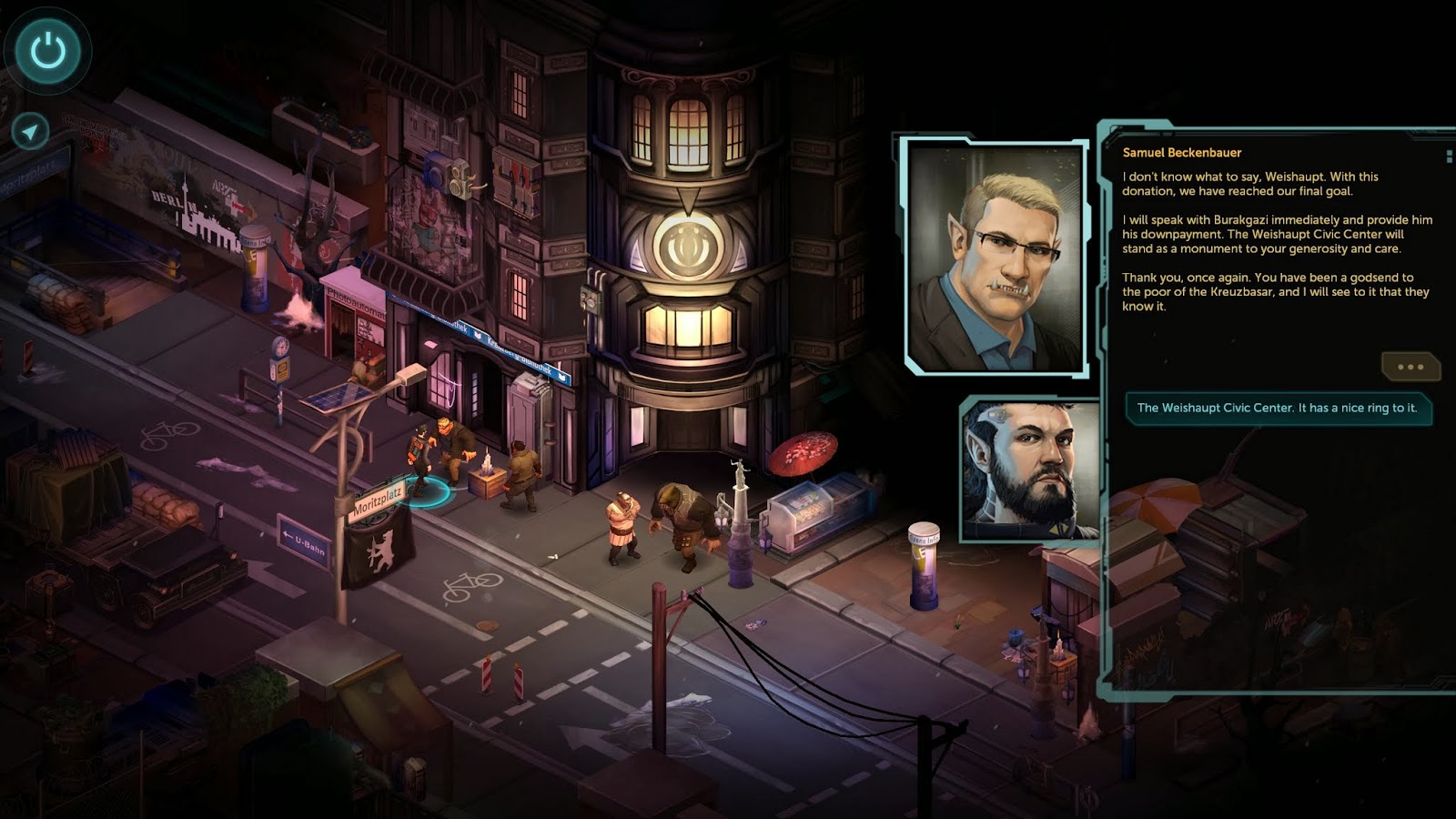 It feels like Harebrained Schemes has listened to the complaints some gamers made after release of the original Dead Man's Switch, and fixed pretty much all of them in the sequel, from adding the ability to save anywhere (even mid-combat) to creating more memorable companions, more corporate infiltration runs, a bigger role for stealth and legwork, and more weighty decisions. Like Dead Man's Switch, it's still tied very strongly into the existing lore for 2050s-era Shadowrun, and the events of this game help shed light on some major plot developments that have been part of the Shadowrun story for decades.

Mechanically, there's a lot to like here:
A few things felt more mixed:
I also have a few petty complaints:
Let's talk campaign!

I've already annotated a web album covering much of the campaign, so I'll be skipping over some stuff that I don't feel like re-typing. There are tons of spoilers in there!

I kept a very consistent lineup throughout the entire game. My PC was a decking master and could easily handle any matrix maps. Otherwise, he made frequent use of Mark Target to assist the team, then his rifle to attack, focusing on mid-range opponents. Eiger was my main damage dealer, switching between shotguns and sniper rifles as needed, focusing on taking down high-risk enemies first. I tended to use Dietrich as a support mage, whose main goal was to boost Eiger's effectiveness via Haste and Aim; he also summoned spirits when possible, and used Heal and Aim on other members as needed. (He does have a really nice AOE attack that could be very useful on occasion.) Finally, Glory was my striker: she would race between enemies, keeping up DOT effects on them or focusing on taking down a particular opponent as needed.

Blitz felt superfluous so I never took him; I know that he's also a rigger, but still, redundant is redundant. I love that Dante became a recruitable companion and was sorely tempted to bring him along for the endgame, but I figured that since he can't speak he would be marginally less interesting than the original team.

For the most part, I liked all of the companions. Blitz was a little on the annoying side, but I'm sure that's at least partly pride. ("No, I'm the best decker!")  I still chatted with him between each mission, and encouraged him to track down his old girlfriend. (Which may or may not have been a good thing; at the time I thought it sounded romantic, but thinking back on it, it seems an awful lot like cyberstalking.) 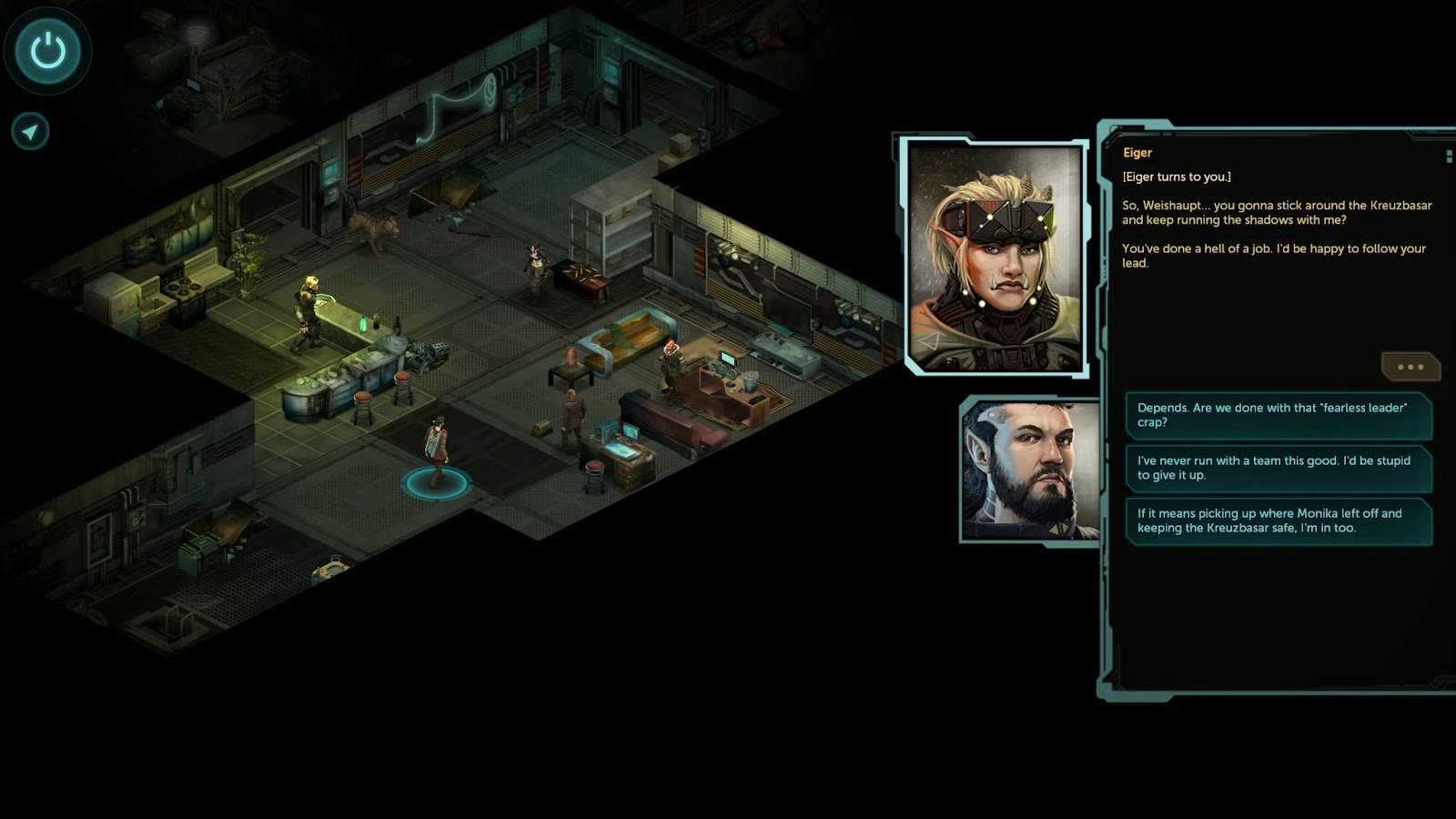 Eiger really dislikes you early on, blaming you for Monika's death. Based on Monika's pre-recorded instructions, I got some tips on how to handle her, and so bypassed my typical super-friendly demeanor to offer a solid, no-nonsense front. She responded to it with respect, and by the end of the game we had a strong working friendship. Her backstory felt a little less developed than the others', and I don't think there's the same kind of opportunities for helping determine her future, but that makes sense since she's focused on the practicalities of being a soldier. 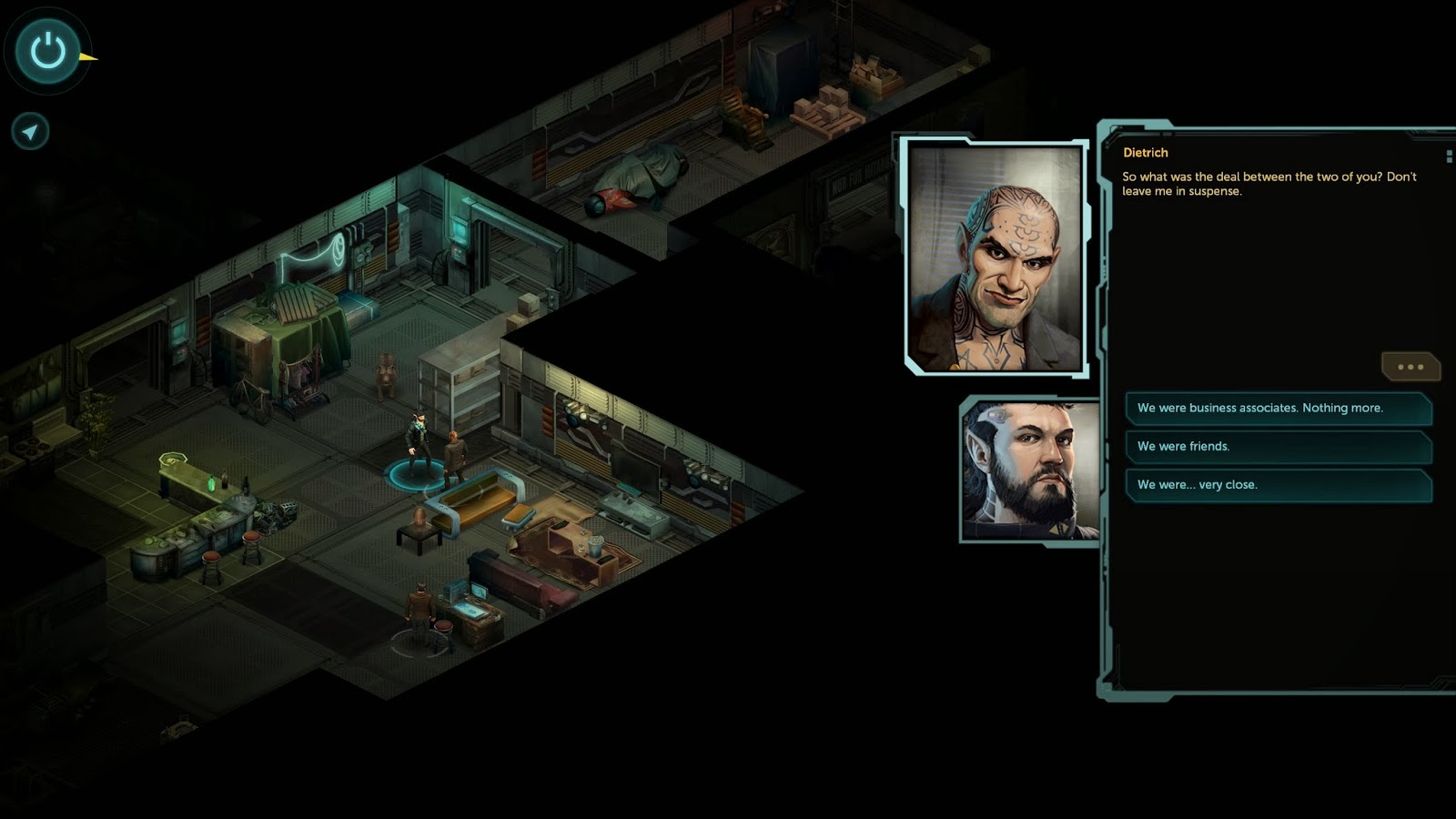 I wasn't initially sure what to make of Dietrich, but by the end really liked him. He's very much the future equivalent of a British punk of the 1970s, using bare fists in street fights against racists. Speaking of which, DF has more to say about metahumanity and racism than DMS did, and Dietrich was just one of several characters to get at it in an interesting way. In his case, he's a human and so part of the "in" group, but is wholly dedicated to fighting against the bad actions of his fellow-humans. Unlike your other companions, his personal arc is actually woven into the gameplay, and it felt very rewarding to help him reconnect with his family and directly carry on his fight against a human-supremecist hate group. 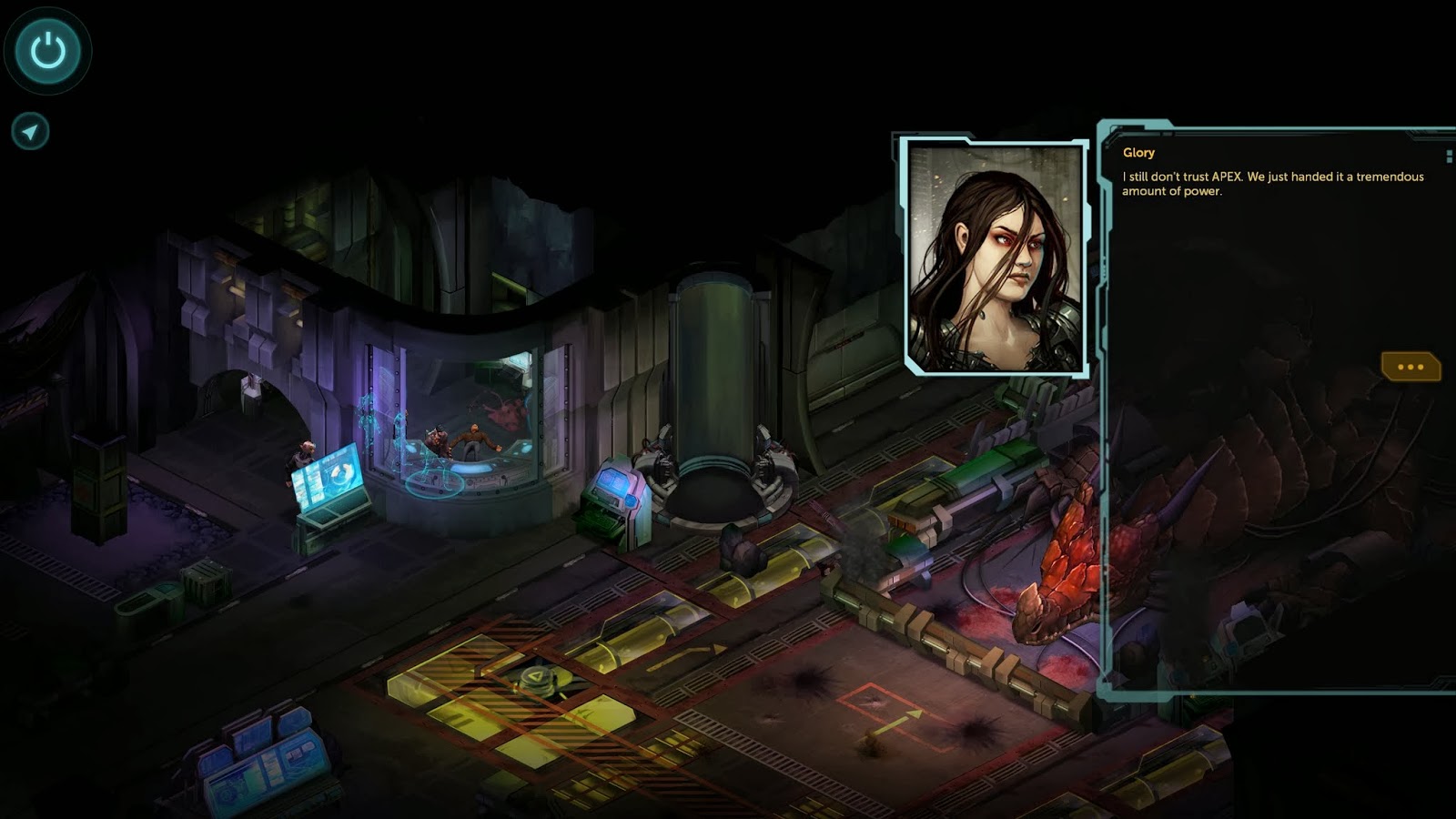 Finally, Glory! Glory was probably my favorite, for a couple of reasons. She's initially extremely withdrawn and cold, but once I started digging into her story, I was pretty shocked by what she'd been involved in before. She kind of has a redemptive arc, but it's a very mature and believable one: she knows it's hopeless to undo the bad things she's done in the past, but you can help encourage her to ensure others don't follow her path. Also, I thought the way they revealed the purpose behind her bulky cyberware was extremely clever and a great tie-in to game mechanics. As soon as I realized that she wanted to escape from the influence of the supernatural world, it immediately clicked in to place for me: of course the best way to do this would be by decreasing your Essence, and the best way to decrease Essence is by installing the largest, most intrusive pieces of cyberware you can find.

Of course, plenty of people outside your team have stories as well. It's a bit like characters such as Cherry Bomb and Madame Kubota, but there are more characters, and their stories feel deeper, and seem to have multiple possible endings (though I can't confirm that yet). I was particularly fond of Simmy, a young naif who had undergone personal tragedy and been addicted to sims. Over the course of the game she evolves from an affectless, totally isolated person into a shy soul delicately trying to re-engage with the world. I also liked Samuel, a politicized orc working to build a community center to serve the needs of the trog community; this was another case where I think HBS were able to use metaraces-as-metaphor-for-races very effectively. Anyways, Samuel's community center seems to be pointless from a gameplay perspective, but was incredibly satisfying from a roleplaying perspective, and I'm really glad they added that in.

Unlike in DMS, the shopkeepers don't really have much more to say between missions. Which is fine; if and when I replay DF, it will save me time running between each shop unless I actually need to buy something.

So, let's see, here are a few of the bigger decisions I made:
So, yeah... fun stuff! The Shadowrun setting is almost always a bleak one, but I really appreciated the many small ways I was able to make it a little bit less bleak. Sometimes that meant letting down a client, or giving up on some potential nuyen, but that just made those acts feel even more meaningful. Still, in the big picture, I felt like I ended up making life a little bit better for a few specific people, and potentially way worse for all of humanity. What an exciting thought!

Lots of online chatter has asked whether getting Dragonfall is "worth it." I would answer with an enthusiastic "Yes." It's not just a fun game, but also one of the best RPGs I've played recently; it feels like it's continuing the gameplay legacy from revered titles like Fallout 2, while simultaneously maintaining the lore of the classic Shadowrun setting. I personally feel like the obsession over game durations isn't very worthwhile - I think we need a lot more Portals and a lot fewer Final Fantasies - but both modern Shadowrun games have offered high quality with no filler, and Dragonfall has even more of that quality to enjoy.

I'm very curious to see what UGC we might see follow in the wake of Dragonfall. The 1.2 editor updates have already added a bunch of great new tools for creators, including better lighting controls, more complex dialogue interfaces, and environmental damage effects; also, since players can now save anywhere, creators should be more confident in creating larger and longer maps, without worrying that a late death will cause a player to lose 20 minutes or more of progress. That said, the stuff that I'm personally most excited about are the new assets: roughly twice as many portraits, lots of great props (including very stylish futuristic nightclub pieces), good terrain (some non-dead grass!), and new 3D models. As far as I can tell, you can use all this stuff, but then your module can only be used by people who own Dragonfall. Which is hopefully a large number, but will always be a smaller number than people who own Dead Man's Switch. If DF doesn't take off, UGC creators might decide it isn't worth the effort to build on that foundation.

Fortunately, it looks like it's off to a good start. It's been getting better Metacritic reviews than the original, and user response has been very positive so far. Which can only be a good thing! A lot of Shadowrun fans have been concerned that Jordan and Harebrained Schemes will be "abandoning" Shadowrun for Golem Arcana. At the moment there aren't any announcements for a third official entry from HBS, but with luck, the expansion will do well enough to convince them to meet or exceed the excellent entry they've made here.
Posted by Christopher Charles Horatio Xavier King III, Esq. at 9:23 PM