If you needed any proof that we are living in an age of glory, I point your attention to the fact that "cyberpunk bartending" is now a genre of video game. I haven't yet played the title that kicked it off, VA-11 Hall-A, but just wrapped up an initial playthrough of a recent entry, The Red Strings Club. I liked it a lot: I went in cold, not knowing much other than the fact that it was a cyberpunk bartending game and that several of my online pals had enjoyed it, so if you'd like to be similarly surprised, you might want to stop reading now. 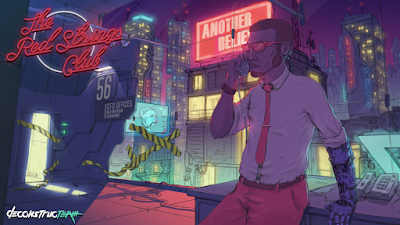 I'll start off by doing the annoying thing of comparing this game to other games. The setting and concerns of TRSC reminded me a lot of Read Only Memories, another recent pixel-y retro-style adventure game. Both titles are very interested in transhumanism, focusing on the augmentation aspects of cyberpunk: not so much about hacking into banks to steal money, but altering our own bodies and minds to guide our own evolution and transform ourselves into new beings. TRSC puts a lot of emphasis on the moral questions raised by this. Its protagonists include both heavily-augmented and unaugmented people, and you talk, argue, and reflect on myriad concerns.

On the whole, I liked this game more than ROM, though I can't totally put my finger on why. The interface is a bit less cutesy, the pixels slightly higher-resolution, the characters felt a bit more well-rounded, the philosophical queries a little more open-ended and urgent. Both games have great casts with diverse representation; for better or worse, the people in TRSC seem less centered in their identities, and by the time you learn their category you've already gotten to know them as a person, rather than the other way around.

Oddly enough, the game I found myself thinking of most often is another one that's now about thirty years old: Manhunter, an obscure adventure game from Sierra. The games themselves aren't all that similar in story and genre, but TRSC reminded me of this odd era in adventure games where interfaces and gameplay would vary wildly throughout the course of a single game. You're introduced pretty early on to the mechanics in TRSC - mix some drinks for your patrons, then use the moods they inflict to question them closely and glean information. But almost immediately we shift into another game, using a lathe to craft neural implants; then there's a sorta turn-based side-scrolling hostage-freeing mini-game; and a delightful sequence of social engineering. You are just starting to get good at one type of gameplay when another one comes along. I like that! I like it a lot! It keeps the game feeling fresh and engaging, instead of grinding things out. But I can see this annoying people; there's probably a reason why modern games tend to stick to a single interface.

The core bartending gameplay is... fine. The concept is nicely whimsical. The actual physics felt a bit off to me, though that might have to do with my mouse or something. Everything else felt better to me. The dialogues are interesting (and, in a note I didn't realize until near the very end, each character's dominant color subtly appears at the bottom of their speech bubble). The lathe felt a bit more natural than the mixing, though I was a bit confused at first about how I was supposed to use it.

But the way the bartending interacts with the dialogue? That is excellent. I rarely experimented with alternate moods in the same conversation, but from the little I saw it made a huge difference. It also seems logical; plenty of times I failed to get the information I was after, but I always realized in retrospect "Oh, I should have switched up drinks before asking this follow-up." There's great strategy here, but the strategy is based in intuition, not in empiricism like most games are.

The people you chat with are an interesting and extremely varied lot. A few of them felt very thinly sketched or confusing; I'm thinking in particular of the supernatural skull guy. It would make for an effective introduction as part of a long-running series, but felt underdeveloped for a game of this length. That's an exception, though. In general, each patron of the bar is engaging and surprisingly three-dimensional. Everybody felt distinct from one another, and I was able to easily track and differentiate them even with longish breaks between play sessions. That's due to their voices, but also some surprisingly effective pixel animations: the way people stride into the bar and perch on the stool speaks volumes about their personalities.

The conversations seem to also be the main source of choice, consequences and reactivity in the game. I think I spotted a few converging branches - every once in a while someone will say something like "Oh, you haven't figured out X yet? Let me fill you in" - but it seems to be a very impressive latticework of informational exchange. Facts you glean in earlier conversations will color later ones, choices you make in other gameplay sections will come back to affect the dialogue (and vice versa), with everything feeling natural and realistic. Pleasingly, you can't really "fail" any part of the game - if you mess up a drink or the lathe you can just toss it out and start over - so the only negative consequences you will suffer are due to your conscious decisions, not mouse jiggling.

It feels like there's a ton of reactivity in this game. As someone who has faked a similar system, I'm curious just how reactive it actually is, especially whether the ending can vary. I feel like I got part of the way to a good ending, with Brandeis resisting the CEO, but it ended in an incredibly sad (but beautiful and heartfelt) scene. It seems like an earlier choice of mine could have steered events in a happier direction, and I'm very curious whether that's actually true; as soon as I publish this post I'll do another playthrough or hop online to check.

I'm in awe of the game's storytelling, and especially its fantastic move from the general to the specific. Abstractly saying "We shouldn't brainwash people to stop murder" is easy. Watching a partner get killed is hard. That moment of being confronted with the living example of your bloodless proclamation explodes your brain. This reminded me a little of the cruel ending to Before The Storm, except this time I felt like I was the one responsible. This sudden torque forces you to re-examine not only your in-game decisions, but your real-world values as well.

I continue to be amazed at the incredibly heartfelt, creative experiences small teams can create. And also at the surprisingly varied topics that cyberpunk can explore! Even though it seems like a niche genre, it opens up a huge area to explore that speaks to our current world and the world we may soon choose to inhabit.
Posted by Christopher Charles Horatio Xavier King III, Esq. at 9:14 PM