Finding a new series is always a fun feeling. I picked up The Family Trade on a recommendation from Nicola Griffith, though I've previously read and enjoyed other books from Charles Stross before. The Family Trade fills a different genre and has a distinct voice. It took me a little while to get acclimated, but once I hit my stride, I enjoyed it a lot. 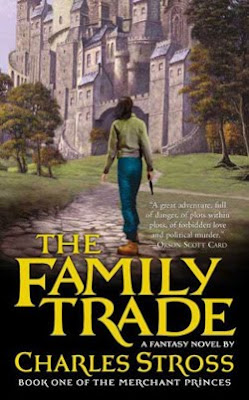 The book was written and is set in the aftermath of the dot-com collapse and the 9/11 attacks, as the Department of Homeland Security and the War on Terror are ramping up. The protagonist, Miriam, is an efficiently-sketched and likeable character. A thirty-something divorcee, she was trained as a medical doctor but currently works as a journalist for a business magazine covering high-tech companies, particularly biomedical firms.

But, it turns out, she is also the heir to an extended family of travelers who can move between parallel universes. As the world of corporate shenanigans and drug trafficking heats up, she is thrown into an even more startling world of medieval culture, with knights riding horses, wearing shining armor, and wielding broadswords and M-16s.

The overall vibe of the book veers towards fantasy, but it isn't, really. There's a single fantastic thing: a select group of people have inherited a genetic trait that allows them to move between two worlds. Otherwise, there's no magic, prophecy, monsters, or other traditional fantasy ephemera. It might be more accurate to describe it as alternate history: the physical world is still the same, and civilizations started out at roughly the same places (with a European wave settling in North America), but has diverged significantly: a different religion (worshiping the "Sky Father"), and general social stagnation keeping the populace impoverished in a rigid feudal system.

This is the first book in a series, and honestly kind of feels like it ends in the middle of a story. Apparently there's a new omnibus edition that collects the first two books together; I suspect that will be a more satisfying way to approach this story. As a stand-alone novel, The Family Trade is a fun read but can feel rather loose. Multiple interesting characters are introduced, receive a good amount of setup, and then disappear before doing much.

I've always enjoyed Stross's ideas, and that continues to be true here. I sometimes have trouble with his writing. I never really got into the second-person narration he deployed in the Halting State books. Here, his dialogue is... very snappy and fun, but super quippy. Nobody talks like this. It feels like almost every sentence someone speaks could be used as the quotable tagline from a movie trailer. It's entertaining, but took some getting used to.

I'm definitely intrigued by the balls that have been set in motion, and am looking forward to continuing this story, sooner rather than later. These books look like fairly quick reads, so I doubt I'll review each individual entry. Barring any unusual development, I'll likely post one big retrospective once I get to the end. I suspect there will be some more developments along the way, it'll be interesting to see where the story ends up.
Posted by Christopher Charles Horatio Xavier King III, Esq. at 6:41 PM