Next up on my surprisingly-political summer vacation reading: The Iron Heel by Jack London. I don't think I've read anything by London for thirty years: I vaguely remember reading Call of the Wild back in elementary school, and nothing since. I've been meaning to return to him for a while, though. He was a native San Franciscan, lived in the Bay Area for much of his life, and is honored locally in various large and small ways. While scanning possible titles to read, The Iron Heel jumped out as particularly interesting: in contrast to his man-versus-nature books I was previously familiar with, this was described as a dystopic science fiction novel. Intriguing! 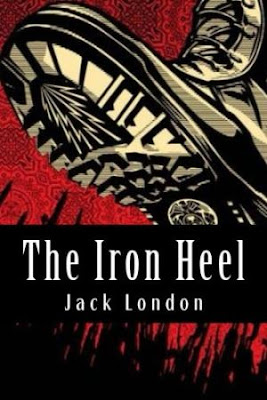 In addition to being a talented novelist, Jack London was also a socialist, and if you didn't know that before, you would very quickly figure it out. The first, no kidding, 150 pages or so of the book is an almost non-stop series of dialogues promoting classical Marxist theory. It's very dull! I happen to agree with a lot of the content, but the form quickly becomes annoying, as London sets his alter-ego against a series of straw men. Have you ever performed the (silent) exercise of imagining an argument with someone else? You go, "I'll say this and then they'll say that and then I'll reply with this perfect comeback and they'll be dumfounded! Yep, I'm pretty smart!" Of course, those conversations never actually play out that way in real life because real people are a lot more complex and intelligent than the automatons inside of our heads. Anyways, imagine 150 pages of those imaginary arguments and you have a really good idea of how the novel opens.

To be fair, those sorts of dialogues have a very strong pedigree. Particularly in philosophy, greats like Plato and Berkeley and Hume used this form to develop and promote their ideas, and that hasn't stopped us from reading them. For whatever reason, I'm less enamored of it in a novel, probably because I want action, darnit!

There's a term in pop criticism that I generally dislike, a "Mary Sue character". If the term has validity, then I think Ernest Everhard is the Mary Suest Mary Sue to ever Mary Sue. He's utterly flawless, destroying all of his foes with his mighty intellect; but strong enough that he could crust them with his fists (or his neck!) if he chose; he's evidently omniscient, perfectly predicting every development that will take place over the entire novel (and, incidentally, robbing it of drama); immediately sizes up every person he meets and accurately states what will happen to them. As the notes in my edition pointed out, Everhard is pretty clearly based on London himself, and I think people who complain about authorial self-insertion would flip out if they ever read this book.

While the opening chapters felt annoying, they moved along very quickly, and they were made much more palatable by the intriguing device London uses to structure the narrative. The Iron Heel was published in 1906, and describes events taking place in the 1910s, Jack London's imminent future; it's technically science fiction for him, but also very much his prediction for the outcome of current events. While Ernest Everhard is the protagonist, it's narrated by his wife-to-be Avis, who is writing the manuscript sometime in the 1930s, looking back at this exciting time in their lives. But the edition we're reading has been edited and released by scholars in the 27th century. The novel contains frequent footnotes from these far-off scholars, explaining to their contemporaries topics that by then seem obscure: who Theodore Roosevelt was, who the Pinkertons were, what a slum was, the incidence of child labor.

These scholars live during the Brotherhood of Man. We gradually learn that the efforts of the Everhards and their allies will, in the short term, be doomed to failure: the Iron Heel will triumph, despotically ruling the world for centuries. But inevitably they will fall, and be replaced with a new era of freedom, equal opportunity, and fraternal solidarity.

That's kind of a spoiler, but also a pretty compelling structure in which to tell a story. You have a sense of fatalism and hopelessness, knowing that the struggle we're watching will fall, but at the same time it's compelling and inspiring to see that struggle, to know that, over the very long course of generations, they will eventually be proven right.

What is this force they're facing? Capitalism, pure and simple. In London's day, this was exemplified by the trusts, like Standard Oil and the railroad concerns. As Ernest observes, there's an irreconcilable conflict between the demands of capital and labor to divide the limited profits generated by their collaboration. Labor has the benefit of numbers, and will ultimately triumph at the ballot box or by force, so the only way the capitalists can hold on to their disproportionate wealth is through overwhelming force of their own: at first by using the judiciary, bought politicians, media organs and bribery; later by enlisting "patriotic" mobs; ultimately by deploying the United States military, militias, and their own paramilitary forces.

It's really fascinating to read this book today, more than a century after it was written. All of London's assertions are made very confidently, and the ones that failed to materialize stick out: we do still have a middle class, nations industrialized throughout the 20th century without starting wars to offload surpluses, the Socialist Party peaked in popularity in the 1910s. The stuff he got right is more subtle and more important: war with Germany, the collapse of Hearst, the use of a bomb in Congress (/ Reichstag) to seize martial powers, the return of conscription, Japanese imperialism. And, of course, the eternal struggle between capital and labor. After decades of relative social flattening between the classes, we've now returned to the mind-boggling gap between very rich and everyone else as was seen in London's day, and it's little surprise that interest in socialism is on the rise again.

The book gets a lot better once the Iron Heel begins to stir and those endless speeches are replaced by dramatic action. It's probably not a coincidence that Ernest becomes quiet for much of this section: he's off politicking, or later languishing in a prison cell, and the novel really opens up now: instead of being obsessed with this unrealistically perfect superman, we start witnessing the struggles of a collection of likeable, flawed, admirable characters. Coming from diverse backgrounds, they are animated by different principles but united in the cause, showing true solidarity with one another.

During the opening chapters I kept wishing that the book was shorter, but by the end I found myself wishing it would go on for longer. I'd have loved to see more of Bishop Morehouse, who returns to the Biblical commandments to serve the poor in dramatic fashion; or Biedenbach, the tragic demolitions expert with a crusty exterior and a soft heart; the young Wickston son, who betrays his own class to support the revolution. Heck, I'd love to read an entire novel about Anna Roylston, the charmed spy and assassin. We get only brief references to these and more characters as the novel hurtles towards its conclusion, but those references are very intriguing.

The climax of the book is the Chicago Commune, which has been foreshadowed and referenced since the opening pages of the book but still feels startling and bloody. The name is a clear evocation of the Paris Commune, a relatively-recent-for-London urban socialist conflict. The Chicago version, though, is a mesmerizing nightmare of modern warfare. You viscerally feel Avis's fear as she races down the streets, chased by enormous mobs of lightly-armed masses, straight into machine-gun encampments that mow down the onslaught. Aircraft fly overhead, dropping bombs onto strategic locations or attempting to shoot down other aircraft. The most compelling and bizarre element is building warfare: entire blocks have been seized by one side or the other, and each fires from its own windows into the other, dealing death twenty stories above a busy street as the battle below rages.

Ultimately, we're left with dashed hopes and disappointment: the revolution betrayed by a few skilled trade unions, unable to control the howling and desperate people of the abyss, the socialists cede all of the power they have only recently gained and resign themselves to fighting a low-key and vengeful insurgency against the triumphant Oligarchy. But, again, the big-picture promise of the coming Brotherhood of Man helps salve the wounds and provide encouragement for the future of humanity.

The Iron Heel isn't exactly what I expected, but it did end up being a blast. I know I've complained at length about the preachiness of the early chapters, but I do really like it when authors have a strong viewpoint and allow it to animate their work, and The Iron Heel is one of the better examples I've seen of that. It feels a little like a precursor to 1984 or Brave New World with its warning against antidemocratic autocracy, but for better and worse it's very much a product of its times, the fears and optimism of the early labor movement. We should probably all be grateful that the Iron Heel he feared did not come into total power, but we can also hope that the Brotherhood of Man is not too far off.
Posted by Christopher Charles Horatio Xavier King III, Esq. at 5:26 PM