Dear diary: Today I was pompous and my sister was crazy... Today we were kidnapped by hill folk, never to be seen again. It was the best day ever.

The movie "Serenity" comes out this Friday, September 30th. I would strongly encourage you (yes, YOU) to go see it. It's a great flick.

I actually got to see it back in June in a special advance screening. I'm trying really hard to avoid giving away any spoilers. I will confine my remarks to just two: (1) You will be able to enjoy this movie whether or not you saw Firefly; Whedon neither demands prior knowledge about the universe nor spends a lot of time in exposition. (2) You will especially enjoy this movie if you thought Han Solo was the best thing about Star Wars.

Now for some more in-depth thoughts, based on my three-months-old recollections. There are NO plot spoilers here, but a bit more information about the thematic elements than some people will want to have, so I'll conceal it anyways.

For those of you who have seen Firefly, this movie is most similar in tone to "War Stories," the episode where Mal and Wash are tortured. There's no torture in the movie, but it has the same sort of extremely dark mixture of anger and violence. There's still some trademark Whedon humor, but those who were hoping for another "Jaynestown" will be disappointed. So be prepared for darkness and you probably won't be surprised.

In some ways, I feel like Firefly virgins may enjoy the movie even more than the veterans. I won't go into why until after the movie comes out, but Joss loves breaking the rules, and you won't be as upset about some of the stuff he does if you weren't already familiar with the rules. Plus they'll be having that "gee whiz!" reaction for the very first time. And I'm sure that most people will happily dig up the Firefly box sets after falling in love with the movie.

I had been worried beforehand that the universe would be too constricted, since Whedon only had 2 hours to deal with here instead of about 13 in the series. In contrast, the universe felt even more expansive, and for the first time I got a sense of the relationships between planets.

Make no mistake: Serenity will appeal most to people who enjoy science fiction. I think there's a strong hunger out there for people who may have enjoyed Star Wars, Star Trek or the Matrix and are looking for another franchise. For these people, Serenity will more than fit the bill: cool spacecraft, violence, interstellar conflict, the works (well, minus aliens). But because Firefly/Serenity is built around the relationships of the crew, I hope it will also appeal to those who merely tolerate science fiction. The dialog, acting and themes are more than enough to carry the movie.

I am curious what the reviews will be like. I get the feeling they'll be evenly divided between "Serenity is the clear successor to Star Wars" and "Meh." Whedon seems to inspire either slavish devotion or contempt, and there will certainly be some reviewers who get hung up on the Western aspect of the universe, or feel that the plot is too busy. Still, I hope most will judge the movie in comparison to other sci-fi fare, and conclude that it is superior to much else that is out there.

I'll probably post a more substantial review after seeing it again this weekend, one with REAL spoilers and more thoughts on the content of the movie and the many, many allegorical readings of it.

Oh, and just for fun, here's a shot I accidentally wandered into at the preview screening of Serenity. I'm in the background on the left, dressed as Wash. 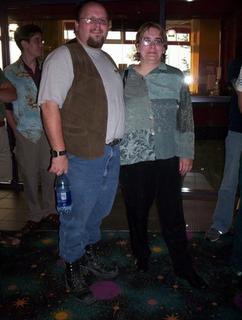