Absolute Sandman is the sort of thing I could never justify buying for myself, but that I'm delighted to own (thanks to the largesse of my brother). I've heard about the Absolute series of comic editions for several years, but this is the first one I've ever held in my hands, and I finally see what the fuss is about. The comics look larger, richer, and more detailed than ever before. With a seminal title like Sandman, that helps me pick up on some particularly subtle and graceful things I'd missed in my initial reading of the book. 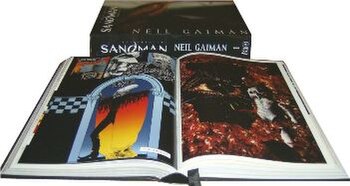 DC Comics / Vertigo reserves Absolute editions for its most high-profile and lasting books: Sandman, Frank Miller's Dark Knight, V for Vendetta, Watchmen, League of Extraordinary Gentlemen, and a handful of others. The pages are much larger; Amazon gives the dimensions at about 9"x15", which seems right to me. Of course, these aren't just the original comics blown up: they look wonderfully crisp, so they must be working off of some higher-resolution original masters. In the case of Sandman, the art was also re-colored, and looks absolutely gorgeous.

I'll be honest: I love Sandman mostly for its story. It's an epic, sweeping, brooding tale, filled with highs and lows and endless digressions. It can be difficult to talk about art in Sandman because it changes so much: Gaiman deliberately switches between artists from issue to issue and from arc to arc, and does a great job of selecting partners whose particular strengths and interests dovetail with the themes he works with in a given issue. That said, I think this presentation helped me understand and appreciate the art better than I ever had before. When I read a comic, I too often race ahead, eager to flip the page and read what comes next; this edition (plus the fact that it was a re-read) encouraged me to longer a bit more, absorbing the beautiful drawings and intricate compositions.

And intricate they are. This edition's most impressive aspect may be the way that it reveals, and even highlights, the tiny details that could otherwise get lost. I may have noticed before that a character was reading a newspaper; now I will read that newspaper's headline, and realize that even the lede's text is legible. I may have noticed before that a character's walls are filled with portraits; now, I can see the face of each portrait subject, and note their resemblance to other characters within the story. Of course, I'm constantly finding little trinkets buried here and there that point sideways, at other elements within the story, or forward, at events yet to come.

The first Absolute edition collects the first 20 issues of the comic, which means that it has all the comics from the first three trade paperbacks (Preludes & Nocturne, A Doll's House, and Dream Country). That equates to the first two major arcs of the story and several impressive stand-alones.

I won't rehash my earlier reviews of Sandman, but I'll say that I was much more positive on Preludes & Nocturnes this time around. It's a stretch that I often feel like I need to apologize for when I'm getting someone else into the series - I feel compelled to offer disclaimers like, "He takes a while to settle on the tone of the comic." What impressed me most this time, though, was how much is already in place. That's particularly true in terms of plot: little hooks like Nada are delivered so fleetingly and offhandedly that you could easily overlook them, only to be blindsided by their eventual import. Conversely, while The Doll's House is still one of my favorite arcs, it loses a little of its surprise and suspense if you already know the final outcomes of characters like Gilbert and Jed.

Like many collections, this edition comes with some delicious extras. High on the list is Neil Gaiman's original proposal for The Sandman to DC Comics, where he lays out his vision for the character. It's interesting to see the things that eventually changed, and how much of his vision was already intact. It's gratifying to see that he didn't just stumble into the idea of the Endless, and had already planned to withhold the reveal of Death for as long as he did - and, from the beginning, he knew pretty much what Death would look like.

I may not have planned on buying this, but now that I have it, I'm increasingly tempted to grab the rest. The first four Absolute volumes cover the entire main run of Sandman. I think I'll pass on the fifth volume, which covers some Gaiman-written spin-offs, and Absolute Death, a slighter volume at the same price point that collects the Death stories (including duplicates from the main Sandman run). I'll try to hold off as long as I can, but I feel like the acquisition is inevitable.
Posted by Christopher Charles Horatio Xavier King III, Esq. at 7:56 PM