My main character, Kiriyon the elf mage, has finally filled up her quickbar. The spells she uses most often are: 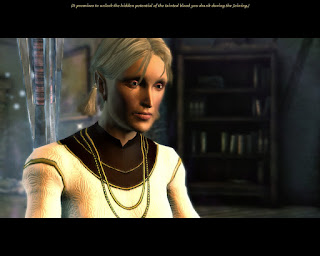 Even with only my major spells and no items, that fills up my quickbar pretty... quickly. I have a couple of other spells that I keep on there even though I don't generally use them (Death Cloud, Dark Sustenance). I'm starting to wonder if I should just stop spending new spell points on new spells, and save them up for when I start Awakening, but I don't know if unused points carry over or not.

I almost always let my companions run on their custom-tuned tactics, very rarely interjecting direct commands. (I think I might have done this a bit more earlier in the game, but at this point their higher power lets them get through at 90% efficiency without needing 100%.) Alistair is probably the simplest. He's the tank, so he always has Threaten and Shield Wall active. He's set up to Taunt the nearest enemy at all times, but I recently realized that, thanks to the massive armor he's wearing, his Stamina is so low that he can only Taunt a single time before needing to regenerate. So, I'll be dumping some more points into Willpower soon! Anyways, besides that he just generally fights whoever is closest, using Shield Bash and such when they're available. 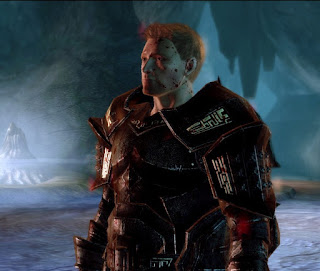 Somewhat frustratingly, this doesn't work too well for a lot of fights. Much of the AI seems programmed to zero in on ranged attack threats, which means that a lot of the time Alistair will engage with one enemy while everyone else simply runs past him and swarms Leliana. I guess I can respect that as a smart tactic on their part, but it does make for a more frustrating game experience. She often ends up switching repeatedly between her melee weapons (dual-wielded daggers, one Crow and one... something else?) and her bow until the rest of us kill the bad guys for her. So, during more important fights, I'll manually switch to her just to instruct her to run to a safer distance, then resume control of Kiriyon. She recently took the Mark of Death talent, which has already proved very handy in boss fights. She usually supports us with the Song of Valor, stays in Rapid Shot mode, and uses her special archery attacks when they come up (Critical Shot, Shattering Shot, Arrow of Slaying). 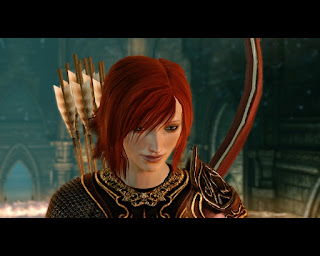 Wynne's tactics are pretty simple as well. She keeps her Cleansing Aura up, and prioritizes healing party members, then buffs, then attacks. Lifeward and Heal on anyone who drops below 50%; Rejuvenate for anyone (other than her) running low on mana or stamina; Regeneration for anyone who drops below 75% health; Heroic Offense on Alistair; Heroic Aura on anyone getting attacked by missiles; Heroic Defense on Alistair. She keeps the whole party running effectively without needing much attention; I only need to keep an eye on her during particularly long boss fights (High Dragon or Gaxkang, anyone?) and make her chug Lyrium if she's running low. 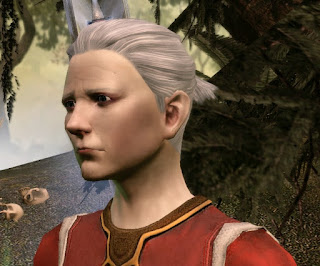 MEGA SPOILERS (kinda, plot-related,  but only through the first 75% or so of the game):

While I am role-playing Kiriyon differently from how I played Seberin the Dwarf Thief, most of the big events have turned out the same way. Both of the characters are fundamentally "good", it's just that Seberin is a more larcenous Han Solo-esque type of good, while Kiriyon is a more virtuous Aragorn-esque type of good. I do sometimes wish that I could enjoy playing as an evil character, just because I'm intrigued by what I've heard of the other ways you can make the story go. In particular, I've heard that you can:
Honestly, simply knowing that those options exist make the game more fun and exciting for me, even without picking them myself.

I don't think I've written about this lately, but I love the tactics system. It reminds me in some good ways of the Gambit system of Final Fantasy XII. I remember initially being a little turned-off and thinking that it felt too MMO-ish, but in practice it's brilliant: it makes you more of a general, overseeing your army and controlling the big picture, rather than an infantry grunt, pushing a button repeatedly.

In lieu of my previous blow-by-blow accounting of the plot, which I have already finished once and is unfolding much the same way this time through, I'm planning on marking-up and eventually posting a link to the screenshots from this play-through. So, uh, I guess you have that to look forward to?
Posted by Christopher Charles Horatio Xavier King III, Esq. at 6:26 PM