I've been greatly enjoying the Steerswoman series by Rosemary Kirstein. In some ways it seems like a fairly traditional fantasy series, but there's some really interesting stuff going on below the surface that greatly elevates it. 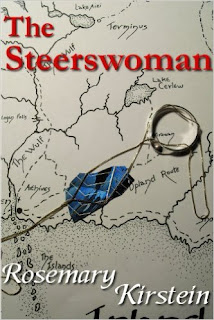 The overall arc of the first book, and the series as a whole, is pretty refreshing: it's a pure quest for knowledge. The goal isn't to slay a villain, or collect an artifact, or unite a kingdom. It's to understand the world better.

The titular Steerswomen are an order devoted to acquiring and disseminating knowledge. They travel throughout the world, studying the land, questioning its people, drawing conclusions from what they find.

The Steerswomen have two basic rules that define their relationship to the rest of the world. They must truthfully answer any question that anyone asks of them. And, if anyone refuses to answer a Steerswoman's question or lies to her, no Steerswoman will answer one of their questions again. Because of this, Steerswomen are generally welcomed everywhere: they have good stories to tell, can provide news, and are continually mapping the known world; navigators in particular enjoy meeting with Steerswomen, since it gives them a chance to update their charts.

Opposite of the Steerswomen are the wizards: reclusive individuals who hoard knowledge of magic, using it to advance their own power and comfort rather than to share with others. Most of the series deals with Rowan, the primary protagonist, gradually discovering the secrets of wizards, eventually surpassing their own knowledge.

One of the reasons the series was recommended to me was its refreshing presentation of gender. The world of The Steerswoman is similar to the vaguely medieval lands that are common in fantasy, with a fairly significant difference: it isn't patriarchal. This is never commented on by any characters in the book; to them, it's perfectly normal, and not something that they ever think would be different. Over time, though, we as readers are struck by how perfectly natural the Steerswoman's world seems. Women are just as likely to be fighters as men, just as likely to be leaders, just as likely to offer their arm to escort a companion.

There's been some occasionally heated back-and-forth in various fan communities about misogyny, in video games and fantasy and other cultures. One common debate revolves around the use of gendered slurs. In a typical exchange, some fans will state that those slurs make them uncomfortable and they wish they weren't part of the game/show/movie/book. Others will state that such language is important to make the work "realistic" or "gritty." And then, inevitably, someone wonders why, in a work filled with dragons and magic and time travel, are people suddenly concerned about the realism of misogynistic attitudes. Shouldn't that be one of the great options available in fantasy (or speculative fiction in general), to show what a different world would look like?

Well, The Steerswoman is that book, or at least the best example I've found of it yet. Critically, it doesn't mean that this world is a utopia where everyone is happy all the time and there is no conflict. There is still plenty of struggle and mystery and violence. But it still feels like a more equitable world, with not just legal rights upheld, but healthier fundamental attitudes between individuals.

The more splashy "twist" of the book, though, is the discovery of what magic is: it's science. These books closely follow Asimov's famous maxim about sufficiently advanced technology being indistinguishable from magic. This is very pleasurable to read in two ways. First, we as readers get a little shock of recognition once we realize what scientific principal is underlying some "spell" that the characters encounter. One of my favorites was a magically-locked chest that will hurt anyone who attempts to open it, except for Steerswomen and sailors. From the description of the chest, you can tell that it's delivering an electrical shock to people who try to open it. Why are Steerswomen unaffected, though? I puzzled over this a while, until some time later when Rowan casually notes that her boots, like those of most Steerswomen, have a gummy sole. Answers click into place and a mystery is solved: Steerswomen and sailors both wear rubber-soled footwear, and so electrical current can't conduct through to the ground.

The greater pleasure, though, is reading about the characters figuring these things out for themselves. Kirstein is a little like Neal Stephenson in the great way that she shows smart characters at work. Lesser authors will present the characters with a problem, then show how smart they are by having them immediately know the answer. Rowan isn't like that, though. Rowan will study the problem, then try something, see that it doesn't work, incorporate the details of the failure back into her understanding of the problem, consider alternatives, produce an alternate theory, try that, see that it works, then repeat and verify. You get to see every stage of the process, from pure bafflement through to mastery, which is incredibly fun to follow.

There are still mysteries to solve; I haven't finished the books yet, and the main thing I'm curious about is exactly what the relationship is between the "normal" life of the inner lands and the hostile life of the prairie. As I see it, possibilities are two. Either this is an alien planet, being colonized by humans or human-like creatures; or this is a post-post-apocalyptic version of our planet, with massively radiated land everywhere that is slowly being reclaimed by its original inhabitants. In either case, I suspect that the wizards are directing the overall effort. And part of me thinks that "Slado" isn't a real person at all, but either an AI or some sort of council.

I'm currently getting close to the end of the third book, The Lost Steersman. (Yes, there are Steersmen as well, although they're rather rarer). Each book continues to evolve in really surprising ways; I never imagined that Rowan would be where she is or doing what she's doing at the moment. The books have been really gripping reads; I happened to pick these up as ebooks instead of my standard paper books, and have been Kindling like mad, even if it's just a few pages on the phone while I stand on the BART platform or wait in line at Trader Joe's. Ordinarily I would try to space the books out to savor them more, but at this point I'm just too eager to see how it ends.

I have another book and a bit to go before finishing the original series, and it sounds like there are a couple more books coming up. I'll probably make one more post when I wrap it all up. So far, though, this gets two very enthusiastic thumbs up from me.
Posted by Christopher Charles Horatio Xavier King III, Esq. at 9:00 PM