Heh, it's hard to believe that it's been over four years since the last time I wrote about Torment: Tides of Numenera. I backed the Kickstarter and enthusiastically followed the development updates, but never participated in the alpha or Early Access. The game was finally released while I was on vacation; by the time I returned, the initial reception seemed lukewarm, and inXile had announced that they were working on a significant patch and content update, so I decided to wait for that. Then I got started on CalFree in Chains and... well, anyways, now that it's been out a year, I finally have the free time to dive into this game and see what's up! 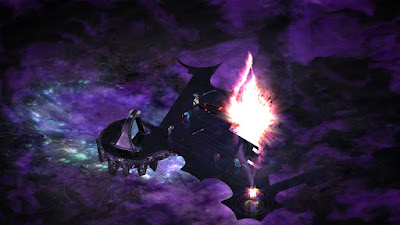 I'm still pretty early in, maybe 10+ hours into what will be a huge game. I just reached Tier 2 / Level 5 and finally recruited the fourth member of my party. I have a long ways to go, and wanted to share some early impressions.

The game is definitely nailing the "spiritual successor" designation. Much like Planescape: Torment, it is very text-heavy, with lots of dialogue and exposition and memories. You are once again rewarded for building a character who is observant and curious, rather than one who is strong and swift. With just a single play-through I'm not sure exactly how reactive it is, but it definitely feels like there are many solutions to almost every problem you face, and not simplistic "fight or talk your way out of it" ones. 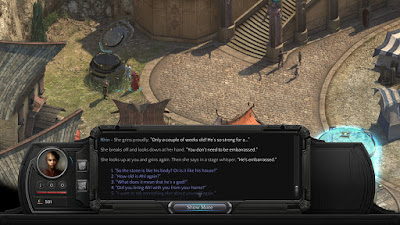 The biggest contrast so far from PS:T is probably the overall mood and vibe. PS:T was relentlessly grim and dark, while T:ToN is quite bright. It isn't a happy game, and you definitely get into some serious issues, but the Ninth World seems like the sort of place I might actually enjoy living. They haven't eliminated the macabre elements of the previous game, but now they're a relatively minor oddity and not a defining feature.

Mechanically, it's taken a while for me to get used to the new Effort system, but I'm mostly enjoying it now. It's a nicely interlocking system that draws value from multiple sources and has multiple options for spending. Something like this is particularly important for a game that's so focused on non-lethal activities: you have a sense of stakes and some failure penalties, even when nobody is stabbing you. My favorite aspect might be how it contributes to the rhythm of the game, and in particular how it influences your decisions to rest. Resting completely refills your Effort pools, but can also advance the status of quests, potentially closing off some solutions. So after a point you start to keep an eye on your pools, trying to drive them down as far as you can while still keeping enough around for essential tasks.

I think I need to do a better job of managing my Castoff's Intellect pool. I seem to burn it down to 0 pretty quickly; in part this is because there are some challenges (like Anamnesis) that you must do yourself. I'm also a Nano with strong skills in areas like Lore, Persuade and Perception, so I'm often better than my companions, but I think I need to let them take on more of those challenges so I can retain more of my personal pool.

During character creation, I was tempted to play as a Jack (pseudo-Rogue), but my initial interview landed me as a Nano (pseudo-Mage) and I stuck with it. I'm really glad that I did: it feels like I'm unlocking a ton of content with abilities like Scan Thoughts and all of my Lore-boosting skills. I'd be very curious to play through at least the first part of the game as a Glaive (psuedo-Fighter) and see how that goes; I think I've seen like three opportunities for combat so far, and not a whole lot of physical-based challenges. 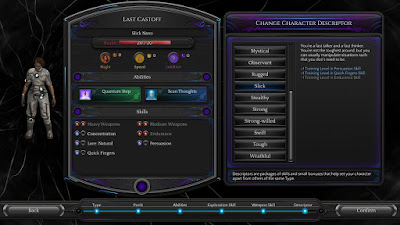 My overall party loadout is very heavy on Intellect, with some decent Speed, and laughably little Might. My Castoff's Might is the highest by a decent margin, and hers sucks. It hasn't really been an issue so far since I haven't run across many Might-based challenges, but I do wonder if I'll regret not having a balanced party later on.

As far as I can see, it looks like people only gain XP while in your party, which kind of stinks. The last person to join came in as Tier 2, so it doesn't look like you're punished too severely for recruiting people late; but she also had auto-leveled her skills, which is a bummer, since it takes away the opportunity to shape her to fit into my party. After the recent trend of Level 0 NPCs in games like Dragon Age Inquisition, it's a bummer of a throwback to the old school of "Race to recruit your desired party ASAP and then never let anyone leave." Especially with (what looks like) a hard limit of 4 party members at a time.

It's a small interface thing, but I'm slightly bummed by the lack of NPC portraits in dialogue. I totally get the reason why: this is a huge game with a ton of speaking characters, and it would be hard to draw all of them. And, if they only gave portraits to "important" characters, it would tip players off in advance about which new characters will and won't stick around. There are some really cool character pictures buried deep within your Journal, but it would have been nice to see something while actually talking with people.

Your companions are semi-voiced, which does tip you off that they're recruitable. The amount of voice acting seems weirdly variable, though. One of my companions has a ton of voiced dialogue, both ambient declarations while walking around and for much of her personal quest. The others are mostly silent. Overall voice acting quality is good, and as I've noted before, I actually follow the "less is more" philosophy when it comes to voicing in retro-style text-heavy isometric RPGs.

Companion banter seems... decent, not great. It reminds me a lot of the banter in Pillars of Eternity: short, quippy, non-interactive, not especially interesting. I think I like the content of these banters a bit more, though it does make me miss the more in-depth crew interactions you would get in games like Baldur's Gate.

The actual characters are pretty interesting, though. They're unique, and also feel very human and real. Callistege's situation is bizarre and unlike anything we've experienced or know, and yet her ambition and drive related to it is completely relatable. There seems to be a good mix of mystery ("Who is this person? What is their deal?") and evolution ("Are they doing the right thing? Should they change?") so far, and I'm looking forward to how those stories continue to develop. 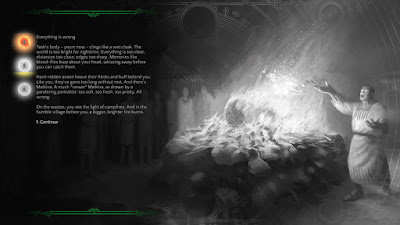 The writing as a whole is very strong. Few things are more tedious than long paragraphs of turgid prose, and I was a bit hesitant about diving into such a verbose game (T:ToN apparently clocks in at around 1.2 million words), but it's been really enjoyable so far. Dialogue is good: not quite as interactive as, say, Dragon Age, and mostly focused on exhausting questions, but there are some opportunities to express your personality and values. There are also long blocks of prose, but it's always about something interesting: sometimes it's interesting because it's about you and your past, other times it doesn't seem to be related to your personal story but is fascinating because of how deeply strange it is.

This is a nonlinear game set in a sprawling world, and there's an enormous variety of stuff and stories to encounter. It's been interesting to think of how they managed to write it all: there are six primary authors of the game, and so far it's been a cohesive result. I was imagining something closer to Failbetter Games, which often conveys the particular style and eccentricity of individual authors. I may get more of a sense of distinct tones as I get further into the game, but at least so far it feels like a unified voice describing this insanely chaotic world. 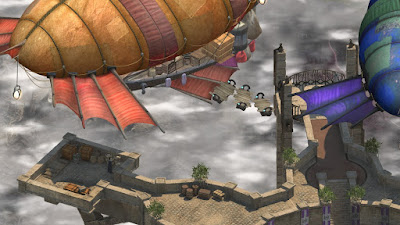 Speaking of which: I've been surprised at just how amenable I've been to the Ninth World of Numenera. As I noted in a previous post on Pillars, I'm decreasingly enthusiastic about encountering entirely new worlds with their own lore. On the surface, the Ninth World would seem worse than most: it's so indescribably vast and ancient and complex, on top of tying into parallel universes and alternate realities and metaphysical realms, that it's impossible to get hold of. But, paradoxically, I find that that's actually freeing. I don't feel any pressure to understand a particular lineage or language or culture. I read about it, go "Oh, that's cool," then forget about it with no guilt. The fact that it is so vast keeps me from feeling the obligation to absorb it all.

I think I'm more or less tracking the plot so far, though it's early and I'm sure it will grow in the future. It seems clear that the Changing God will be a major focus of the game, probably the antagonist but maybe not. There have been quite a few references to the Endless Battle between the Changing God and the First Castoff, which seems a likely candidate for the main point of the game, although it might be planting seeds for a hypothetical franchise future.

My current party consists of Callistege, Rhin, and Matkina. My Castoff and Callistege are both heavy on Intellect, with some non-optimal overlap in Lore ability. (It's a little annoying that you can usually, but not always, use companion lore skills.) I started tilting Rhin towards Speed for more variety, but Matkina seems to have that nailed; I'll probably keep up that division, though. Rhin starts with a strong Intellect pool and edge, so she can definitely pitch in on that front when needed.

One thing that's been kind of interesting, and maybe not intentionally so, are quests that I don't want to take. I'm getting ready to leave Sagus Cliffs and wrapping up unfinished business, and there are a few that I just can't make myself do. Elevating the wannabe Aeon Priest seems noble, but requires lying. The bit with the imprisoned biomechanical creature in Circus Minor seems like it should have a diplomatic solution available, but you can only access that solution after lying to one or both parties. And I'm not sure if I want to recruit for the Changing God's side for the Endless Battle inside the Fifth Eye. I guess it's good that I feel invested enough in the story, world, and characters to willingly sacrifice some XP and rewards by passing over these quests, but at a meta level I'm curious if the developers actually intended refusal as a deliberate choice. (Props to them if they did - that's yet another thing I dig about Failbetter Games, where refusal to start something is just as powerful and valid of a statement as doing it.)

Not much about the plot yet, I'll do at least one big post-game wrap-up that will cover my impressions of the overall story and themes. Depending on how long the game is, there might be a couple more check-ins along the way. So far, though, I'm really digging the atmosphere and the unique gameplay on display.
Posted by Christopher Charles Horatio Xavier King III, Esq. at 9:03 PM