Silence by Shusaku Endo is a challenging book. It isn't a hard read; the prose (at least in the translation I read) is engaging, and it isn't excessively long. But it focuses on tortures of the body, mind, and spirit in a deliberately discomforting way. Not for the sake of shock, but it inhabits those trials fully and asks you to imagine yourself undergoing them as well. It's a novel of suffering, the reasons for it and the process of enduring it. 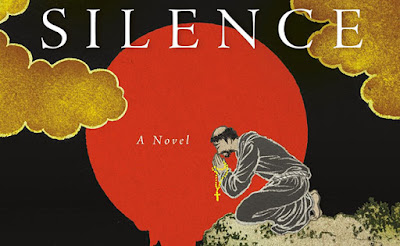 Endo gets at this in a variety of ways through the book. It opens with a series of letters written from the Portuguese priest Rodriguez to his superiors back in Europe as he embarks on a secret missionary trip to Japan. After several generations of open tolerance, Japan's leaders have imposed a brutal crackdown against Christianity, forbidding any practice of the religion and expelling all Europeans from the country. We see events through Rodriguez's reports as he recounts their journey and the reception they find there.

Later, after the priest stops writing, we shift into a long portion with third-person attached narration. We see even more of Rodriguez's struggle and sympathy as he is forced to make difficult choices. The novel ends with a more detached historical section, in the form of log entries from Dutch traders living on Dejima.

That last bit was a really cool tie-in to The Thousand Autumns of Jacob de Zoet; I'd thought of that book at the start of this one, realized that this one was set earlier, and was pleased to see a strong link at the end. Religion was also an important theme in that novel, although it plays a very different role. Jacob's faith is intensely personal: he's much more devout than his fellow countrymen, but keeps his faith secret and hidden as he balances his responsibilities as a company employee, as a Dutchman, and as a Christian. Rodriguez doesn't have that luxury: he is defined by his responsibility for his flock, and all of his self-worth is bound up with how well he is fulfilling his mission.

Both Jacob and Rodriguez face risks associated with their faith, although the ones Rodriguez faces are far more dire. One major theme that Silence brings up over and over is that it's easy to keep faith when you don't face persecution. Those of us who live comfortable lives in a state that doesn't challenge us may find it easy to look down on those who would betray their principles and surrender their beliefs, but it's very likely that we would have performed even worse if truly put to the test. The flip side of this that Endo presents is that we should feel sympathy for those who have fallen, and not hostility or judgment.

And the tests shown in this book are very harsh indeed. I tend to think of torture or martyrdom as a very personal thing, where a person is challenged to surrender lest they lose their life or incur more suffering. There's a dark appeal in the idea of standing up tall and proudly proclaiming "I will gladly give up my life for X!" But the characters in Silence don't get the luxury of that righteous stand. The question becomes "Will you give up others' lives for X? Will you allow the people you love to suffer for X? Will you punish those who follow you for X?" For virtuous people with a strong conscience, this is an especially insidious and effective tool. I'm a little surprised we don't see it depicted more in fiction, and I imagine it gets used a lot more often in real life.

And what exactly is at stake here? There's some interesting comparison of exterior actions versus interior faith. The Japanese officials keep insisting that trampling the fumie doesn't mean anything, that it's just a formality: people can still keep their faith in their hearts as long as they deny it with their bodies. But, of course, the ultimate goal is to destroy the interior faith of the remaining Japanese Christians. By bringing down the respected leaders of the religion, they hope to eliminate the rebellious, foreign spirit that is associated with these beliefs.

Or do they? Near the end, Inoue says that it doesn't really matter if Christians still exist or still practice their faith, because it isn't the real Christianity, that they don't believe in the same God as the Catholics. Which makes me wonder why he puts so much effort into making the European priests recant. Is he worried that they would "correct" the beliefs of their flock? I don't think so; he seems to think it's impossible for the faith to ever really take root in this county. Or maybe he's just forcing the recantations because that's what the Shogun wants, but is philosophical enough about the situation that he sees a bigger picture. Or this could all just be a sort of game for him, a personal challenge that he enjoys, to overcome an adversary through intellect.

The question of whether a certain population really "understands" God is a big question that hangs over missions in general. There's definitely an elitism which says that western Europeans have the one / best / true understanding of the faith, and anything that deviates from that deviates from the truth. By those standards, adaptations of God or Christ are indicative of some mistake, a failure on the part of another tradition to grok the gospel. But I'm inclined to put more faith in the genuine expression of other cultures. In the New Testament, the best-educated people with the deepest scriptural knowledge were the villains, while the simple people without specialized theological training were embraced. Some cultures might focus more on Christ's divinity, while others focus more on his humanity, but both are true expressions of a transcendent reality, and I think it's a mistake to treat these sorts of variations as intrinsically false.

This book was a bummer, but a meaningful bummer, which reminds us of how fortunate we are and compellingly places us in the shoes of people who have a far more difficult burden to bear. Its exploration of faith, culture, and persecution are hyper-localized to the Ieyasu period of Japan, but that specificity makes it more compelling and understandable, perhaps easier to comprehend than a more generic fictional setting would have been. It isn't a call to action, but something well worth reflection and pondering.
Posted by Christopher Charles Horatio Xavier King III, Esq. at 7:35 PM